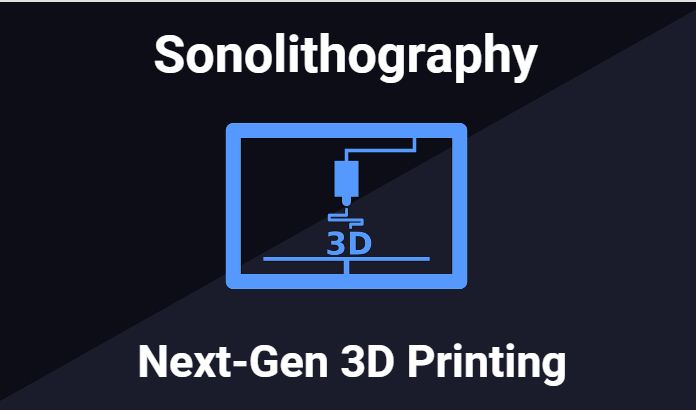 Researchers in the UK are developing cutting edge technology that harnesses the power of ultrasound to manipulate particles in precise patterns – something that could have far reaching implications for the next generation of 3D printing. This process, known as sonolithography, works by using soundwaves to organise microscopic aerosol particles or droplets into predetermined patterns. The level of accuracy and low cost of sonolithography means that it is likely to supersede regular 3D printing methods, especially in the fields of medicine and electronics, though benefits could be seen across many other sectors.

Whether or not sonolithography will be able to be used in the home printing market remains to be seen, although the low costs associated and the fact that it uses some commercially available technology may make it an option for the future.

3D printing techniques have quickly become some of the most useful and prevalent tools in the manufacture and design of bespoke components. These techniques allow for multiple

design iterations to be completed in a day, where in the past this may have taken weeks or months using  traditional manufacturing processes. The most common techniques to date are fused filament fabrication (FFF), selective laser sintering (SLS) and plastic jet printing. Sonolithography is a novel technique which aims to bring even more versatility, accuracy and cost effectiveness to 3D printing in a multi-material environment.

When you hear the word ‘acoustics’ most people generally think and associate this with concert halls – string instruments, guitars and churches or other spaces where sound is affected by structure. But acoustics is a major branch of physics, dealing with the study of mechanical waves in gases, liquids and solids. This includes the study and application of vibration, sound, infrasound and ultrasound – the last of which is the key to sonolithography.

Impact of ultrasound on 3D printing

Ultrasound refers to sound waves that are beyond the range of human hearing, and in this case ultrasonic frequencies are used to manipulate particles and droplets. The dense clouds of material are algorithmically patterned to settle into shapes on a substrate, meaning that a wide variety of intricate, highly detailed objects can be printed quickly at low cost, but with no compromise on precision and accuracy.

The combination of computer controlled algorithms and commercially available transducers and other electronics make this a particularly exciting prospect for the future of 3D printing.

Scientists have long been moving microparticles with ultrasound, using sound waves to levitate small objects successfully and stably. Spectroscopy is probably the best example of this, using the technique to analyse a droplet of fluid, isolating it from substrate which can obscure or add ‘noise’. This is particularly effective in blood analysis.

Researchers from the universities of Bath and Bristol in the United Kingdom have added a new facet to the technique, namely directionality. This means that when several ultrasonic waves are combined particles can be controlled by generated acoustic radiation – essentially allowing for precise patterns of airborne droplets to be allowed to settle into algorithmically determined shapes.

The fact that soundwaves keep all the material airborne during the process means that droplets won’t come into contact with anything else. This gentle, non-contact and rapid patterning makes sonolithograpy printing ideal for use in biofabrication – the production of tissue and cells for transplant onto patients.

3D printing and additive manufacturing is already helping to save lives, and sonolithography is fast becoming an effective method to produce a wide range of medical items. One of the first medical uses of 3D printing was in the field of prosthetics, with prosthetics tailored specifically for patients. Likewise, the technique can be used for reconstructive surgery, with bespoke replacement knees commonplace, as well as jawbones and other bone structures that proved to be successfully implanted and fitted for patients. Sonolithography works with a variety of materials such as calcium phosphate, the primary constituent of natural bone.

Biofabrication refers to the production of complex biologic products from raw materials such as living cells, matrices, biomaterials and molecules. This practice means that tissue and cells can be generated to repair areas of the body that may have been affected (by prior medical procedures) without the use of grafts or other therapies.

While tissue and cell production is becoming more widespread, the capacity for a 3D printer of any type to produce actual organs is still being explored. To date, the only printed organ successfully transplanted into a human is a bladder, formed from the host’s bladder tissue. However, research continues, and given the advancement in precision printing that sonolithography offers, perhaps it isn’t too far in the future that bespoke organs will become commonplace.

Dr Jenna Shapiro, research associate in the School of Cellular and Molecular Medicine at Bristol University certainly believes that sonolithography could help make progress in this field:

Other scientists leading the research effort are confident that their efforts could be used for other cutting edge medical applications.

“The objects we are manipulating are the size of water drops in clouds,” said Bruce Drinkwater, professor of Ultrasonics in Bristol University’s Department of Mechanical Engineering.  “It’s incredibly exciting to be able to move such small things with such fine control. This could allow us to direct aerosol sprays with unheard-of precision, with applications such as drug delivery or wound healing.”

As well as medical usages, sonolithography will benefit the production of intricate electronic items due to the range of materials sound waves are able to manipulate. Ultrasonics have already been used to arrange conductive inks into circuits and components. In fact, solderless circuit boards can be easily produced with a 3D printer. They can be made at the same size and thickness as a standard 1/16″ thick, through-hole solder perfboard. Removing the need to solder components greatly simplifies the production process, making it quicker and cheaper than ever.

There is no doubt that 3D printing has revolutionised manufacturing. But as the studies from Bath and Bristol universities show, sonolithography represents the next generation of this exciting and rapidly developing technology.